AMHERST, Mass. – The University of Massachusetts Amherst is pleased to announce the creation of a seed fund by anonymous donors to support research of quantum information systems, including an anonymous lead gift in the amount of $5 million. The fund aims to bolster an existing creative and collaborative partnership between the College of Information and Computer Sciences (CICS) and the College of Engineering (COE) with the mission of solidifying UMass Amherst’s position in the cutting-edge field of quantum information systems. 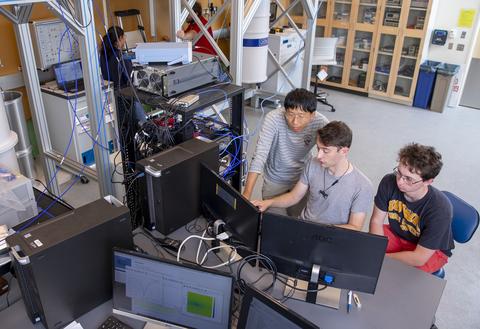 Faculty at UMass Amherst are already deeply involved in quantum information systems—a field that promises to develop systems capable of processing larger amounts of information at faster speeds than classical supercomputers. Don Towsley, a distinguished professor in CICS, is a co-lead on a research thrust funded by the National Science Foundation’s Engineering Research Center for Quantum Networking. His goal is to develop quantum network architecture that will enable distributed quantum computing and sensing as well as make communications more secure. Towsley’s leadership and extensive research in this ground-breaking field inspired creation of the seed fund for donors who are interested in investing in the expansion of this work.

“Quantum computing, communications, and networking have the potential to significantly transform the ways we solve complicated computational problems and conduct scientific research,” says Towsley. “A critical ingredient in this endeavor is the development of a ‘quantum internet’ to provide network security and to connect quantum computers that, collectively, will help to solve currently intractable problems, such as those related to climate change. My passion is to bring the quantum internet to life, and this gift will help to make that happen.”

The fund also supports the current work of Distinguished Professor Weibo Gong, electrical and computer engineering, who has been focusing on a fundamental issue of artificial general intelligence research, namely the concept extraction algorithm and its applications in reasoning. Gong’s work is in a major way motivated by symmetry implications widely used in quantum physics and general relativity. COE has an established track record of quantum research, including the work of Professor Joseph Bardin, who has been working with a multidisciplinary team at Google to improve quantum readout circuits since 2017.

“The area of quantum information systems is a national priority for the United States, with the potential to grow new industries and advance our national and economic security,” says Chancellor Kumble R. Subbaswamy. “This investment by donors in an interdisciplinary quantum information systems seed fund, placed at the intersection of the information and computer sciences and engineering, will accelerate our campus’s ability to make increasingly significant contributions to this area of national importance.”

The fund will strengthen the critical mass of CICS and COE faculty dedicated to quantum computing research by funding a position for a new theoretician in computer science and a position for an electrical and computer engineering experimentalist. Support from the donors will cover start-up costs, equipment, postdoctoral researchers, and research assistants for each position. These new faculty will join the two recent hires in this field who were funded by the university.

“The new fund builds on almost 60 years of revolutionary computer science research at UMass Amherst and positions us as a destination of choice for outstanding quantum faculty,” says Laura Haas, dean of CICS. “It is only fitting that Don Towsley, who led the way on foundational networking and communications theory research, is now helping the nascent field of quantum communications take its first steps.”

Quantum computing holds so much promise because it harnesses the unique ability of subatomic particles to exist in more than one state at the same time. Unlike classical computing, the use of more quantum bits enables the quantum computer to handle operations at exponentially greater speeds, due to its ability to solve problems in fewer operations, while consuming a lot less energy. The applications of quantum computing include the potential to develop more energy-efficient batteries, the improvement of radar systems, the creation of more accurate financial forecasts, and the ability to keep water sources clean using chemical sensors.

“The College of Engineering, and the Department of Electrical and Computer Engineering specifically, look forward to advancing quantum devices, sensors, integrated circuits and algorithms for emerging quantum information systems through this new fund,” says COE Dean Sanjay Raman. “We are deeply grateful for this opportunity to accelerate groundbreaking research and lead the way forward in this emerging area of importance.”

By establishing a fund for this type of research through the support of donors, UMass Amherst will be better able to foster collaboration and innovation related to the most effective ways to build a quantum computer and the most efficient ways to minimize or correct errors in processing. This type of research requires significant resources to conduct, and one of the goals is to reduce the cost and increase the accuracy so that quantum computing can become more widely applicable to solving problems.

U.S. News & World Report’s guide Best Graduate Schools ranks UMass Amherst as having the No.1 public computer science and engineering programs in New England and ranks the university’s computer science program as the No. 11 public program in the nation.